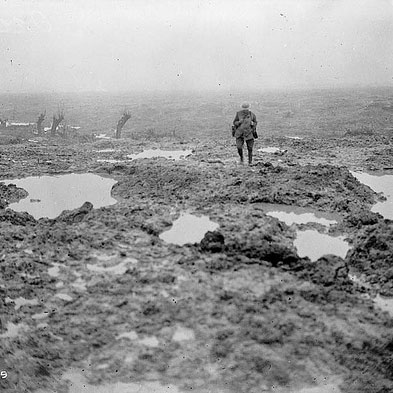 A hundred years after the outbreak of the First World War, the Gergiev Festival in Rotterdam presented this war as the central theme in the festival programme. ‘Niemandsland’ (No man’s land), a music-theatre production in collaboration with OPERA2DAY, ran as a red thread through the festival. The performances were on the 12th and 13th September in de Doelen in Rotterdam.

Director Serge van Veggel – previously responsible for the Gergiev Festival – in collaboration with playwright Bart Boone created a production in which the ‘unknown soldier’ reviews his wartime experiences, in a collage of original diary entries and sometimes absurd wartime stories.  In the dark basement at the end of the performance, this past suddenly seems to come very close. The music came from the dramatic Ragazze Kwartet: along the way, the sublime unity of the classical string quartet becomes increasingly more fragmented through the growing chaos.

The production was well-received by the press. De Volkskrant wrote 'At the bar of De Doelen, 'wartime coffee' and a 'ration package' (canapés) could be bought. This feels totally wrong if you have just experienced the production of Niemandsland, wherein the actor Joost Dekker and the Ragazze Kwartet have carried you along the path into the inferno where millions of young lives were crushed a hundred years ago. Under the direction of Serge van Veggel, the script of Niemandsland, based on a handful of records from the period, was powerfully reinforced by music ranging from the charm of Mendelssohn to the harsh sounds of a quartet by Erwin Schulhoff. As a confronting conclusion, the audience was sent in groups to the basement of De Doelen where, with much finesse through the use the mediums of sound and projection, they were again forced to face the horrors of the First World War.'

De Telegraaf wrote 'A small-scale festival production touched closest on the theme (of the Gergiev Festival, namely the First World War, ed.). Serge van Veggel, director of Opera2day, created the location performance Niemandsland, based around the ‘unknown soldier’ (the actor Joost Dekker) who recounts memoires of his wartime experiences. The collage of original diary entries and wartime stories, often confontingly harsh, was accompanied by cutting edge string quartet playing by the talented Ragazze Kwartet. The first half of the performance took place in one of the upper foyers, whilst for the second half, the audience was sent down with the lift to the basement. In this underworld, an oppressive journey through the catacombs of De Doelen awaited, full of impressions of the trenches and the battlefield. At the end, there he lay, timelessly. The Unknown Soldier.'

The production Niemandsland was presented in collaboration with the Gergiev Festival Rotterdam.

Niemandsland in Moois on RTV Rijnmond (from 15.30min)

The performance will be given in Dutch.

The performance consists of two parts. The second part is not recommended for those who have trouble walking or standing for extended periods or for wheelchair users.

The performance of Niemandsland takes place in the Eduard Flipse Zaal in the Concert- en congresgebouw de Doelen in Rotterdam. The entrance is on Karel Doormanstraat 223.